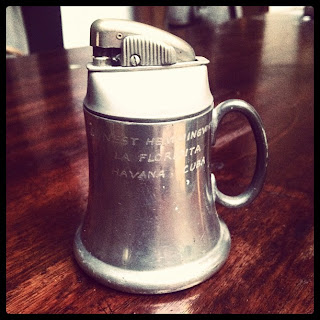 Regardless of this old British Abercrombie & Fitch lighter actually belonging to Papa, it's pretty cool...but how much more cool would it be if it actually DID belong to Hemingway? I found it at this tiny shop - Lovejoy Antiques - a couple blocks from my apartment yesterday afternoon and my mind has been awhirl ever since. After a cursory poke around the internet, I've sussed out the following:

- He considered La Floridita, the old Havana bar that served him countless daquiris back in the day, one of his favorites. (He's seen below throwing back one of these said cocktails with Spencer Tracy in 1955).

- He was known for buying stuff from Abercrombie (including the fateful shotgun).

- On the other hand, though, the folks at La Floridita have not let the lore of Hemingway's patronage fall subtly into history. The joint has a statue of the guy sitting in there today, so it's no stretch to imagine that this is actually just a nice piece of touristy memorabilia, a luxury version of a Hard Rock Cafe t-shirt. (However, I couldn't find others online).

What do you think?