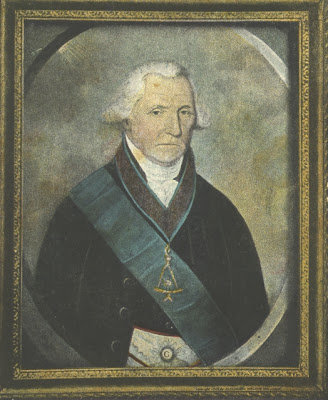 The Virginia Masons broke off from the Pennsylvania chapter and started their own lodge - Alexandria Lodge No. 22 - on April 28, 1788. Under the new Virginia charter they named a Master: George Washington. On a hunt for a non-Peale portrait of the General, I came across these wonderful old postcards depicting the artifacts and history of the lodge and Washington's influence there. As told by the Washington (State) chapter, the story for each goes like this:
This rare picture of General Washington in Masonic regalia, was painted from life by Williams of Philadelphia, in 1794 for Alexandria Washington Lodge, No. 22, A. F. & A. M., of Alexandria Va. of which Washington was then a Past Master.  It is probably the only authentic work showing him in advanced age.  the apron and sash worn in the picture were inherited by "Lawrence Lewis," Washington's nephew, who presented them to the Lodge in 1812, where they ate still preserved. 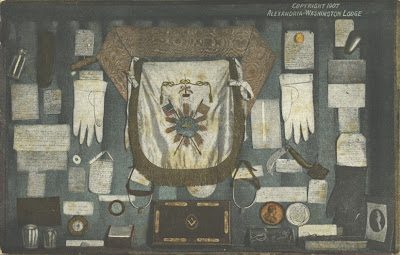 This collection of Washington relics is the property of Alexanderia Washington Lodge, No. 22, A. F. & A. M., and presented to the Lodge in 1812 by Lawrence Lewis, Washington's nephew; his wedding gloves; farm spurs; pocket compass; pruning knife; medicine scales; bleeding implements and many other valuable relics which have been presented tot he lodge from time to time by his relatives. 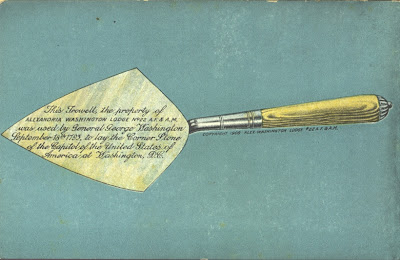 This Trowel has been used on many important occasions, the most notable being the laying of the Cornerstone of the National Capital (by General Washington) in 1793.  Washington Monument in 1848, and the Masonic Temple in Washington, D. C., by President Roosevelt, in 1907. 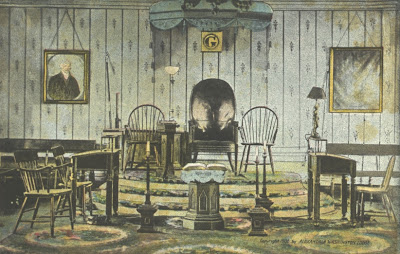 Ease view of "Old" Alexandria Washington Lodge, No 22; A. F. & A. M., Alexandria, VA., of which General George Washington was first Worshipful Master in 1788.89, showing Master's chair occupied by Washington when Master, also original desk, benches, etc.  The Lesser Lights were used at the laying of the Cornerstone of the National Capital and at Washington's Funeral.  On the wall to the left of Master's Chair is the Williams Painting of Washington, made in 1794 for the Lodge. 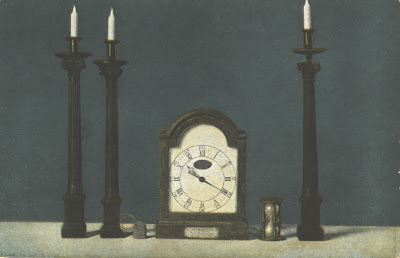 The Lesser Lights of Alexandria Washington Lodge No. 22, A. F. & A. M. Alexandria, VA., were used by the Lodge at the laying of the cornerstone of the National Capitol in 1763 and at Washington's funeral in 1799. The Clock was in General Washington's bed chamber when he died.  Doctor Elisha C. Dick, Master of the Lodge and one of the attending physicians, cut the pendulum cord and stopped the old timepiece at ten-twenty P. M., the exact time of his death.  Three days later Mrs. Martha Washington presented it to the Lodge.  Pendulum or weight with cord severed shown to the left of clock, hour glass to the right. 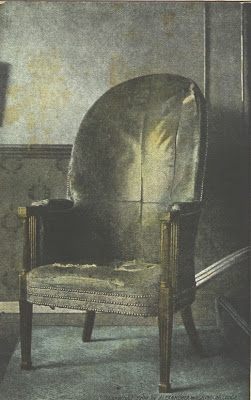 This Chair, the property of Alexandria Washington Lodge, NO. 22, A. F. & A. M., was occupied by General George Washington while Master of the above named Lodge 1788-9, and was in constant use for 117 years.  Now kept in a glass case and used only on special occasions such as installation of officers, for distinguished guests, etc.
(Happy 4th of July!)