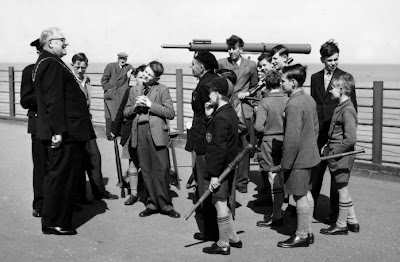 In what is only slightly less remarkable than the lightning speed by which The New York Times' and EinesTages' readers sorted out both publications on the original owner and creator of a WWII photo album, one quick search of the "Walpole Bay Ship Spotting Club" led to this amazing motherload of personal history about the boat-loving boys and their great leader shown in the post below. One man posted the following inquiry on the Kent History Forum site: 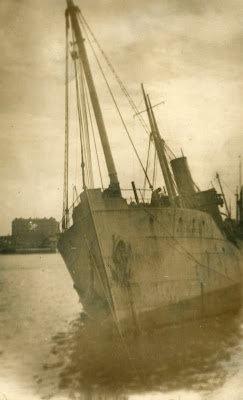 Can anyone identify the vessel on the postcard? The name is either ARGANTOCK or ARGANTOCH. The postmark is 1936 though the photograph could have been taken a lot earlier. I and a friend have conducted several researches through the Shipping Registers but have drawn a blank.The only piece of information I can find is from a French newspaper giving ship listings from various ports.
Regards,Ted 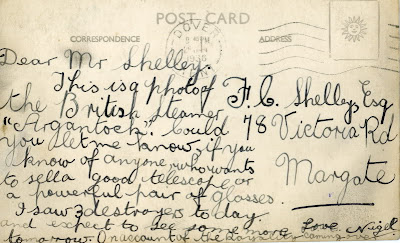 Well, Ted got some great answers:
...I knew Mr Shelley when I was a mere youngster. By profession he was a Watch and Clock repairer in Margate in the 1950's. He was very keen on the English Channel shipping movements and ran a Ship spotting club in Margate. I can remember going on a boat trip that he organised on the Thames which included going through the locks into the Docks on a small pleasure craft under the stern of what seemed to be a gigantic ship. In the 1950's Mr Shelley lived on Grotto Hill with his Sister and Bro in Law. He was our next door neighbour.
- AND THIS! (AND THE PHOTO AT THE TOP) -
I also knew Fred Shelley. He founded the Walpole Bay Ship Spotting Club in the late 50's early 60's. We spent many a day with him and his very large telescope at Walpole Bay during our summer holidays. As you said, he arranged many a visit to ships in the Royal Docks. The photo came from his collection that was given to me when he passed away.


Click here for some more fun details on Mr. Shelley.