Auctions | Skull and Bones Ballot Box and Photos at Christie's 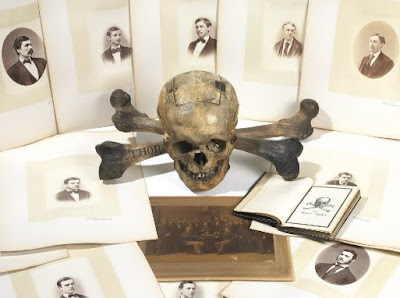 For an estimated $10,000 to $20,000 you could: a) make damned sure your secret club's precious ballot box doesn't end up in the hands of some lowly Harvard grad; b) teach your children the proper etiquette of blackballing; c) have an antique - albeit a bit macabre - vessel to hold jelly beans.

The present lot, with hinged flap on top of the skull was said to have been used as a ballot box during society meetings or displayed in the Society's headquarters at 64 High Street in New Haven. The inscription on the right cross bone Thor could be a name which would have been assigned to a member upon induction. Accompanied by approximately 50 photographs of society members and a small black book inscribed with names (which were published until 1971), the present lot provides a rare glimpse into the society which has been linked to many influential figures and leaders at Yale University and in this country.

It all hits the block at Christie's New York on January 21-25 in the Important American Furniture, Folk Art, Silver and Chinese Export sale.

(Thanks to Urban Daddy for the tip)