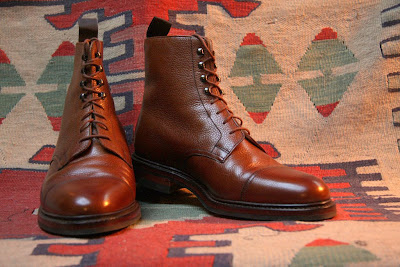 During college, I interned for CNBC's show Power Lunch.  Some little internship angel must've been floating over me because while all the other non-paid plebes were stuck in Fort Lee, NJ running around with tapes for the whole summer (I did that, too), I got to:
- Field produce a segment at Le Cirque (and eat a meal in a special "viewing booth" right in the kitchen)
- Attend the MLB All-Star Game at Fenway (we did a special edition broadcast from the stadium on the business of baseball and a producer and I were tasked with asking all the players their investing advice -- Ken Griffey, Jr. told us that his mom makes those decisions)
- See hundreds of computer geniuses attack a veritable king of computer geniuses.
For the latter, we were doing a live show from one of the tech conventions at the Javitz Center.  As host Bill Griffith was interviewing Michael Dell, I was told to start handing out free CNBC tee shirts.  Free things at conventions make men (and women) act like wild animals on meth amphetamine.  Michael Dell finishes his interview and receives a tee shirt from one of the producers, just as the supply for the masses has run out.  So, instead of going on their way, the masses turn on Michel Dell and start grabbing for his.  He pulled his shirt back and walked away.
If you want to witness a slightly more polite and refined version of this, head to the top floor of Brooks Brothers at 44th and Madison for the men's 70% off sale.  There's some incredibly beautiful stuff -- including these Peal & Co. boots ($200!).  I also picked up some Peal & Co. brown and white spectators ($150!) to wear with jeans next spring. The prices online aren't nearly as good.