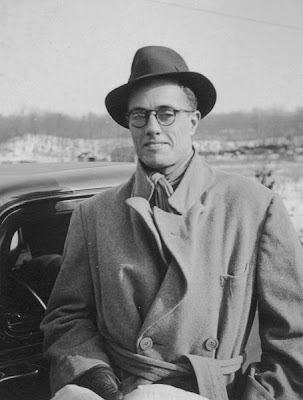 John A. Lomax always loved the cowboy songs, but down in Texas, his professors rebuffed this folklore as "cheap and unworthy." It wasn't until he headed to Harvard that he found support for his ballad hunting from scholars Barrett Wendell and George Lyman Kittredge, who "heartily joined in encouraging the work, as a real contribution both to literature and to learning."  As Lomax jumped between teaching jobs in Texas, Wendell encouraged him to apply for the aptly themed Sheldon Fellowship for the Investigation of American Ballads. He got it.  The resulting 1910 collection of Cowboy Songs and Other Frontier Ballads helped immortalize these old tunes and caught the eye of another ballad fan.  The following letter from former President Teddy Roosevelt opens the book.  The following are scans of my 1930 copy:
(Above, Lomax ca. 1930s, from the Library of Congress) 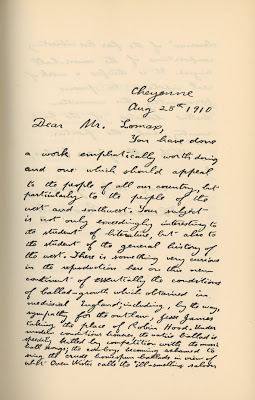 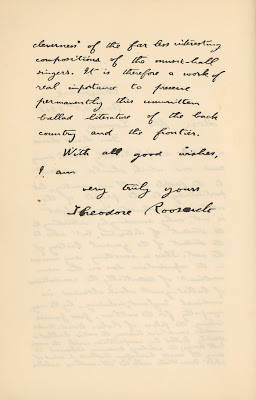 Cheyenne
August 28th, 1910
Dear Mr. Lomax,
You have done a work emphatically worth doing and one which should appeal to the people of all our country, but particularly to the people of the west and southwest. Your subject is not only exceedingly interesting to the student of literature, but also to the student of the general history of the west. There is something very curious in the reproduction here on this new continent of essentially the ballad-growth which obtained in medieval England; including, by the way, sympathy for the outlaw, Jesse James taking the place of Robin Hood. Under modern conditions, however, the native ballad is speedily killed by competition with the music hall songs; the cowboys becoming ashamed to sing the crude homespun ballads in view of what Owen Wister calls the "ill-smelling saloon cleverness" of the far less interesting compositions of the music hall singers. It is therefore a work of real importance to preserve permanently this unwritten ballad literature of the back country and the frontier.
With all good wishes,
I am
very truly yours
Theodore Roosevelt
* * *
Some thoughts on toning down the cowboy lyrics for polite society from Lomax's intro to the book: Obviously, a number of the most characteristic cannot be printed for general circulation. To paraphrase slightly what Sidney Lanier said of Walt Whitman's poetry, they are raw collops slashed from the rump of Nature, and never mind the gristle...There is, however, a Homeric quality about the cowboy's profanity and vulgarity that pleases rather than repulses. The broad sky under which he slept, the limitless plains over which he rode, the big, open, free life he lived near to Nature's breast, taught him simplicity, calm, directness. He spoke out plainly the impulses of his heart. But as yet so-called polite society is not quite willing to hear. - John A. Lomax, Deming, New Mexico, Aug. 8, 1910