Ahead of Mother's Day, a Few Notes on Lana Hovey 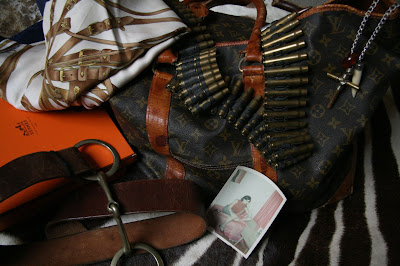 A few of mom's things...There must be a gene or something in amniotic fluid that triggers a love of luxury goods, equestrian aesthetics, animal parts and symbols of war. She used the Vuitton to carry my diapers.
1) She claimed to be 5'11 3/4" - but she was at least two inches taller than Porter and I, who measure in roughly at 5'11" (Porter has a few millimeters on me).
2a) She would have given her right arm to get into the Mademoiselle magazine internship program after college. She applied to that and a summer program at Radcliffe. She got Radcliffe, not the internship. It crushed her. But Radcliffe changed her life...and she started a job at Mademoiselle the week after the program ended.
2b) While at Radcliffe, she attended a small lecture by a tall Harvard Med student who'd just written his first novel, The Andromeda Strain.  He asked her out. She, being too shy, said "no" and gave up any chances of being Mrs. Michael Chrichton.
3) She called my dad (also named Porter) Posengaze; He called her Lanereeze. These terms of affection (which I don't think have ever been spelled out) seemed to come out - very loudly - at the grocery store. "Posengaze, how are we doing on cereal?!?!"
4) She hated the PTA and refused to let Porter join the "Just Say No" club because she found it sick that parents would be asked to tattle on other people's children.
5) She never pulled punches when advising us on ways to navigate the grade school social scene:  "'Sally' is a mean little bitch because she has no self esteem. Don't let it bother you. Just wait to see what happens to her in high school."
6) She loved black licorice and Blind Robbins (not necessarily in the same snack).
7) She sent out press releases about my birthday parties.
8) She cried when I joined a sorority, saying she didn't raise a daughter to be a conformist.  A week later, after being forced to paint a plastic cup for a racist girl I never liked, I gave my pin back. We never spoke of it again.
9) She never once let us celebrate Mother's Day.