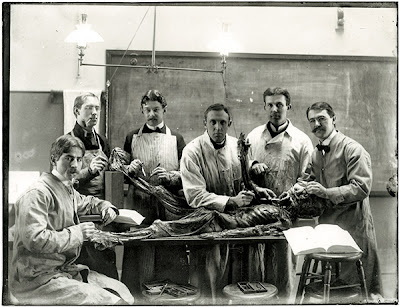 Oh, the right of passage that is one's first science class dissection. Mine were mostly uneventful, although I did give up clam chowder for 10 years after prying open one of those bivalves in 7th grade (my god, they have a "foot"!). All my specimens, whether fetal pigs or worms came to me very dead, soaked in formaldehyde. My mom didn't have it so easy.  Her teacher wanted to give the kids a glimpse at living anatomy. He doled out fully living and breathing frogs and told the class to administer an ether-soaked cotton ball, bop them on the head and then "pith" the spine (stick a needle-like thing through its vertebrae to scramble the spinal cord). All very sweet serial killer-type stuff for a bunch of 12-year olds (Charles Starkweather lived sort of near by...maybe they did that in his science class, too).
Mom had landed a brain surgeon's son as her lab partner and thought she was home free.  They etherized, they bopped, they pithed, they split that guy open and pinned him down...and then that thing came back to life with the rage of an angry chimp.  It ripped itself off the wax tray and flailed about the room, innards exposed to the world.  I suppose it eventually died. My mortal fear of frogs (disemboweled or not) always reared its ugly head at that point and I never really let her finish telling the story.  I do sort of wish someone had been around to take a picture, though.
It seems a lot of people actually did like bringing cameras to anatomy labs.  John Harley Warner, chairman of Yale’s History of Medicine program, and James M. Edmonson, curator of a museum of medical memorabilia at in
(Photo: Cushing/Whitney Medical Library, , from “Dissection” via The New York Times)
More great images on the incomparable Morbid Anatomy blog.