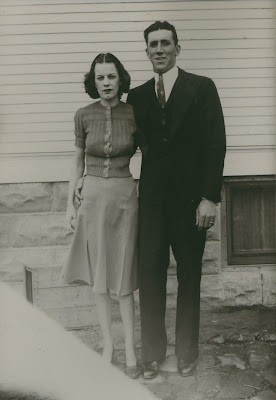 Our sweet, wonderful Grandpa Pete died on Saturday. He was 93. Born in 1915 in Lincoln, Nebraska to German Russian immigrant parents, he raised rabbits on the family farm as a child and gandy danced for Burlington Northern during his summers as a teen, a job that kept him away from the war, busy until retirement and full of great train stories, like Woody or Dylan.  He met my grandma Vi (that dame above) at a dance, but neither one was that thrilled.  "I'm not dating that farmer," she told her friends. "I'm not dating that made up clown," he told his.  Somehow, they both got over it.  They met again a couple years later and started to date.  Then broke up - until her sister and her boyfriend set her up on a "blind date." Was Vinona Mae furious when they pulled into his driveway.  She got over that, too...
Grandpa was a guy who loved his daughters, cheap beer (straight from the can, but sometimes red (with tomato juice, a Nebraska thing), too) and Cornhusker football.  He grew the world's best tomatoes and made his own pickles.  He taught us how to fish and always cut a rug when Boxcar Willie or Hank Williams records would play.
Porter and I head back to Lincoln tomorrow to say our goodbyes. He'll be buried right next to Grandma Vi.
We'll love you and miss you forever, Grandpa Pete.