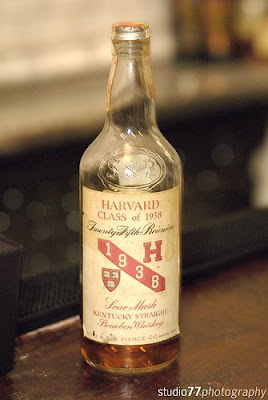 Meat by the pound, beer by the gallon and top shelf bourbon. That, and the largely bearded crowd, are why we love Fette Sau. While we're very, very familiar with the meat and the beer, we've only made a mere dent into those dark spirited shelves. But we went for Porter's birthday a couple weeks back, and a few of us splurged and made our mark at the very top with a taste from this baby, a 25th reunion gift for Harvard's class of '38 and a mighty delicious one at that. The smoothest I've ever tried - no burn in the least. And just look at that label. 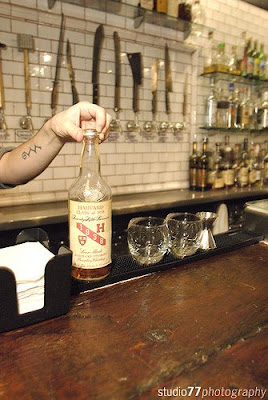 It comes from the S.S. Pierce Company. According to the Ephermera Society of America: S.S. Pierce & Co. was known throughout the United States for its gourmet foods and liquors that were shipped with great éclat by its founder, Samuel Stillman Pierce. Born in Dorchester, Massachusetts, Pierce (pronounced “purse”) established a corner grocery store in Boston’s West End in 1831 that evolved into a leading purveyor of such specialty items as pâté de fois gras, terrapin stew, Hawaiian pineapples, and pickled reindeer tongue—all of which makes us aware of how cosmopolitan our ancestors’ palates had become.