Porter and I spent Easter in Scandinavia last year (which, despite cheap flights is not highly recommended given that both Stockholm and Copenhagen shutter themselves almost completely), but the anniversary has me aching to return to Europe...especially to our mortifyingly uncharted territory: Italy. We've travelled decently in our lives - between the two of us, we've hit, Paris, London, Norfolk, Stockholm, Copenhagen, Arhus, Budapest, Vienna and Marrakech, but neither has set foot on or near Italian soil. Such sin. Our grandpa did a good job pre-compensating for our lack of judgement. The top shot is from Venice in '28 and the bottom, from '37. 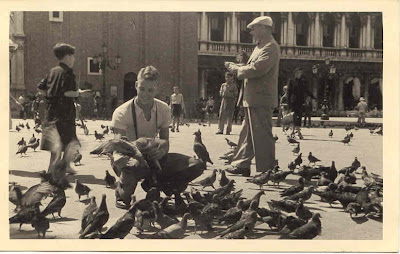