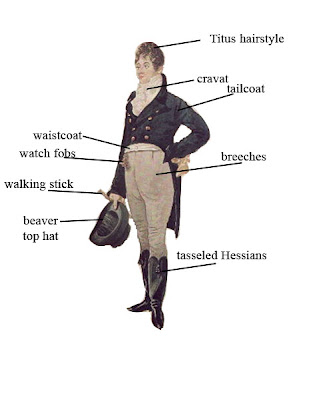 Beau Brummell is credited with introducing and establishing as fashion the modern man's suit, worn with a tie. He claimed five hours to dress, and recommended that boots be polished with champagne. To wit, his style of dress was known as dandyism.

In 1794, Brummell was an undergraduate at Oriel College, and later embarked upon a military career, but resigned his commission and abandoned it when his cavalry regiment was ordered quartered to Manchester.

Brummell's downfall was caused by a falling-out with the Prince of Wales;[4] provoked by his infamous remark, Alvanley, who's your fat friend? (about Prince George, who had earlier snubbed him in a fit of flightiness); it doomed his social prominence in that it removed the Regent's social umbrella that had protected him from creditors and the like. In 1816, he fled to France to escape social ostracism and the sudden demand for payment in full of thousands of pounds sterling owed.[5] He lived the remainder of his life in France, and died penniless and insane from syphilis in Caen in 1840. (All from Wikipedia)