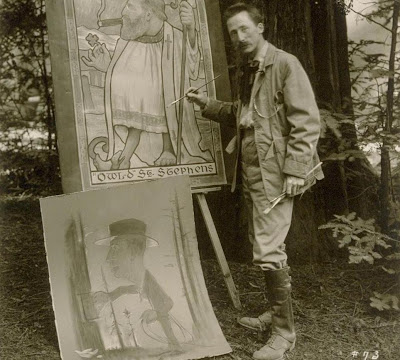 On a recent sojourn to San Francisco, I passed by a lovely florist cum taxidermy shop near Union Square. This passage occured after a few cocktails, leaving me without the presence of mind to write down the name. Lucky for me, my former neighbor recently relocated to the city on the Bay and I've sent him on a passive quest to locate this gem. In the process, he's discovered something even better. He writes:
Haven't figured out the taxidermy place yet, but you would have passed a mysterious building inscribed with the motto "Weaving Spiders Come Not Here" which is ... drum roll ... the Bohemian Club, the ultra-exclusive social club which organizes the buck-wild Bohemian Grove gatherings of the rich & powerful.
He knows how to get a gal's attention! Upon further research I discovered that The Bohemian Club was formed in 1872 by men who sought shelter from the frontier culture (or lack of culture). The Bohemian Club owns the aptly named Bohemian Grove, a 2700 acre redwood forest, located in Monte Rio, CA. that contains accommodation for 2000 people to "camp" in luxury.
Maclean's magazine (via a website called 100777.com), March 23, 1981 reported:
"Each summer, for three weekends - this year's will be the 103rd - nearly 2,000 Bohemians, with guests in tow, speed in by car and corporate jet to their guarded Grove, close by the hamlet of Monte Rio (population 1,200) on the Russian River. The Grove's Shakespearean motto, "Weaving spiders come not here," is an injunction to forget wheeling and dealing which is widely ignored. While 'ruling-class cohesiveness' rarely lets slip details of accommodations arrived at there, some - such as the 1967 agreement by Ronald Reagan, over a drink with Richard Nixon, to stay out of the coming presidential race - have helped mold America's destiny.
The Club has evolved into an association of rich and powerful men, mostly of this country (there are similar organizations in other countries). Some artists are allowed to join (often at reduced rates), because of their social status and entertainment value. The membership list has included every Republican U.S. president (as well as some Democrats) since 1923, many cabinet officials, and director; & CEO's of large corporations, including major financial institutions.
Major military contractors, oil companies, banks (including the Federal Reserve), utilities (including nuclear power), and national media (broadcast and print) have high-ranking officials as club members or guests. Many members are, or have been, on the board of directors of several of these corporations. You should note that most of the above industries depend heavily on a relationship with government for their profitability.
The members stay in different camps at the Grove, which have varying status levels. Members & frequent guests of the most prestigious camp (Mandalay) include: Henry Kissinger, George Shultz, S. D. Bechtel, Jr., Thomas Watson Jr. (IBM), Phillip Hawley (B of A), William Casey (CIA). and Ralph Bailey (Dupont). George Bush resides in a less prestigious camp (Hillbillies) with A. W. Clausen (World Bank), Walter Cronkite, and William F. Buckley.
Today, a prospective member faces an interrogation that, according to one club man, 'would satisfy the KGB.' There is a waiting list of 1,500 notables, all eager to pay the $2,500 initiation fee and $600 a year dues.
The grove is the site of a two week retreat every July (as well as other smaller get-togethers throughout the year). At these retreats, the members commune with nature in a truly original way. They drink heavily from morning through the night, bask in their freedom to urinate on the redwoods, and perform pagan rituals (including the "Cremation of Care", in which the members wearing red- hooded robes, cremate a coffin effigy of "Dull Care" at the base of a 40 foot owl altar). Some (20%) engage in homosexual activity (but few of them support gay rights or AIDS research). They watch (and participate in) plays and comedy shows in which women are portrayed by male actors. Although women are not allowed in the Grove, members often leave at night to enjoy the company of the many prostitutes who come from around the world for this event. Is any of this hard to believe? Employees of the Grove have said that no verbal description can accurately portray the bizarre behavior of the Grove's inhabitants.
For decades, there have been vague rumors of weird goings on in Bohemian Grove in more remote parts of its 2200 acres. Reliable reports claim Druidic like rituals, druids in red hooded robes marching in procession and chanting to the Great Owl (Moloch.) A funeral pyre with "corpses." (Scores of men work in the Bohemian Grove as servants so this party is fairly well established.)